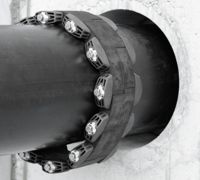 Tightening the bolts expands the elastomer to make a watertight seal. Optimum tightness is confirmed by the bolt head window. 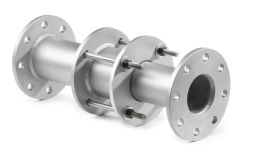 In applications were thermal movement of the pipe is present, expansion joints are required to compensate for axial expansion / contraction of the pipeline.

Thermal expansion joints can be supplied from 50 mm up to 600 mm diameter pipes. Joints are available with flange connections or pipe ends that are beveled for welding connections also they can be ordered with a restriction device.

WA-Expansion Joints are engineered for requirements such as special lengths, alternative materials or special seals can be incorporated in the design.