WA-GP-F Liner seals - are dual purpose seals sealing both the pipe penetration and liner at the same time.

WA-GPF liner seals have a fixed and a loose flanges. 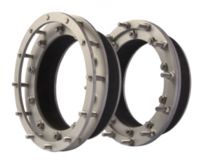 The loose flange clamps the liner and the disc seals around the pipe penetration.

Multiple pipes through the same opening and a wall liner may also be sealed using-the the WA-GPF.

WA-GPF seals may be used with core drill openings or wall sleeve openings. 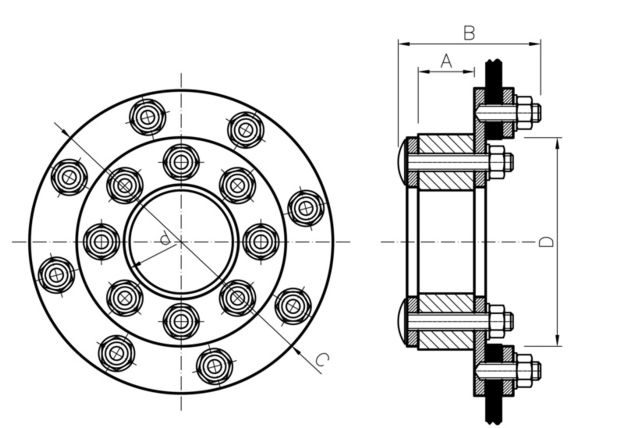 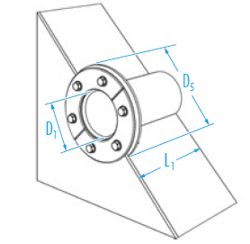 External Wall Mount Disc Pipe Seals are used when a pipe penetration needs to be sealed from outside the wall or inside the wall. Ideal for for cases where a core opening is too small, the pipe is not centered or an out of round condition exist in the opening. 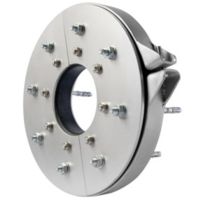 WA-GP-B sealing units are external wall mount seals designed with a very low profile. Sealing for pipes up to 20" with 36 psi sealing capacity. Seal elements may be EDPM/ NBR or Silicone. Compression plates may be 304L or 316L stainless.

WA-GP-B seals are available for all American and International pipe sizes. The pipeline remains in service while the seal is installed.

WA.GP-B seals provide a secondary waterproof pipe seal when a previously installed link seal is leaking. The external mount seal may be installed while the pipe remains in service. 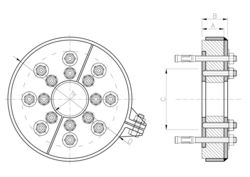 WA-GP-B model disk-seals are available in a split version for existing pipes, or one piece units.

They are simple to install with a very high clamp force ring.

WA-GPT Thimble wall sleeves, mount on a wall face outside or inside the wall.

To seal an existing pipe use an open (split) model of a WA-GPT.

Waterproof seal outside the wall for pipe penetrations through a concrete wall.

The back collar may be flat or curved to suit the wall profile. The units may be used for concrete walls or metal walls.

Wall sleeves may be used for metal tank or concrete and block wall pipe penetrations. .

Anchor bolts or bolt fasteners fix the units to a wall. 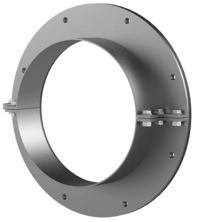 The assembly combines a "T" sleeve and collar, the collar seal gasket seals the collar against the wall. 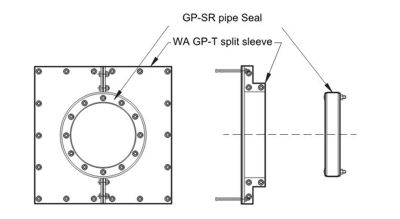 For pipe penetrations in a close together through the wall.

When a previously installed link seal leaks, a WA-GPT is the recommended solution for repairing the leak fault. Repairs are made while the line remains in operation.

WA-GPUM seal for off center pipes

Annular space seals for pipe penetrations eccentric in the opening. 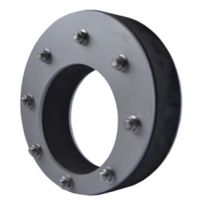 Eccentric seals WA-GPUM units are manufactured in a split version for existing pipes that are not in the center of the opening.

It is not necessary for a carrier pipe through a casing to be centered for a water-tight end seal. The exit position of the carrier pipe, centered, below center or above center will determine the seals inner opening position for a watertight seal.

Pipes are considered to be fully (100%) eccentric it were lying against the inside diameter of the wall sleeve or core drill. A pipe would be concentric (0% eccentric) if it were perfectly centered in the casing or wall opening.

WA-GP-UM eccentric disk-seals for pipes not centered through the opening. 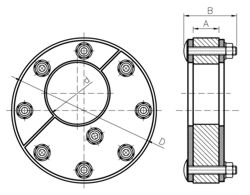 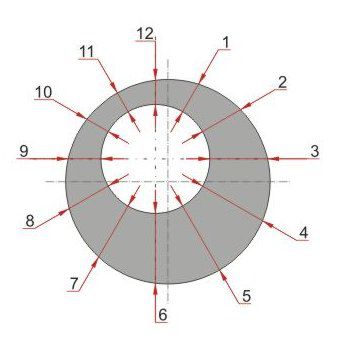 For gravity feed systems it may be necessary to increase the casing size to obtain a correct grade line. As long as the minimum space, is more than 25 mm off the casing bottom or top wall - an eccentric pipe seal can be used to seal the pipe through the casing.

When ordering a WA-GPUM, it is necessary to measure the displacement (eccentricity) at 12 point locations; as shown in figure. Measure outward from the carrier pipe outside diameter to the opening ID.

How to measure the distances for a Eccentric Pipe condition. 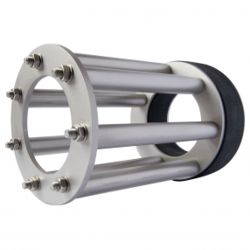 Seal pipe penetrations placed at an angle through the wall. Long bolt extended reach allows the seals to be optimum torqued.

Sealing around pipes seated deep inside a core hole or sleeve.

All American and International pipe sizes may be sealed using WA.GP-KAR seals.

Long bolt pipe seals allow access to seal a pipe from inside a building wall at the outside face of the wall.

WA-GPLR Disk Seals, have a slightly larger plate for added force resistances where hammer pressure along a pipeline exist.

- The larger compression plate prevents fall through in vertical mounts.

- In applications where a pipe seal might be exposed to a large water force beyond normal design or where kick out might occur, the flange is further enlarged for wall anchor fastening. Blow out of the seal is not possible. Only by-pass leaks escape rather than seal failure. 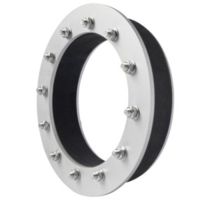 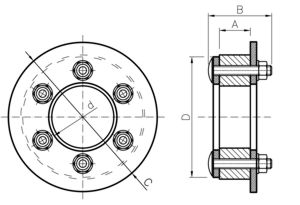 WA-GPLR seals may be supplied in a split wersion for existing pipes.

The larger diameter flange absorbs the excess pressure along the pipeline and maintains the seal integrity.